This site will not be updated or monitored going forward.

Risk-neutral probability distributions (RND) are used to compute the fair value of an asset as a discounted conditional expectation of its future payoff. In 1978, Breeden and Litzenberger presented a method to derive this distribution for an underlying asset from observable option prices [1]. The derivation of the relationship is well presented in A Simple and Reliable Way to Compute Option-Based Risk-Neutral Distributions by Allan Malz which is summarized below [2].

In the absence of arbitrage, the European call option value can be related to the discounted expected terminal value under the risk-neutral distribution.

Differentiating the call option value with respect to the strike price gives what Malz refers to as the “exercise-price delta”.

, the probability that the underlying price at expiration will be

To arrive at the risk-neutral probability density function, one more derivative with respect to the strike price is needed.

Now we will present an overview of deriving these distributions numerically using the infamous May 2020 WTI Crude Oil contract that went negative in April. Albeit these are American options, the analysis is interesting nonetheless.

To approximate the partial derivatives, we need option prices for a fine grid of strike prices. In fact, Breeden and Litzenberger simply assume that options are traded at every positive strike price. The first step is thus to fit a smooth function to the Black-Scholes implied volatility smile of the option prices. We interpolate implied volatilities rather than prices because the former tend to be smoother and better behaved. To ensure that the prices and implied volatilities are clean, open interest can be used to weight or exclude certain strikes. We constructed the smile using out-of-the-money calls and puts as these options tend to have more open interest than their in-the-money equivalents. Numpy’s polyfit is then used to interpolate and extrapolate the smile as needed. 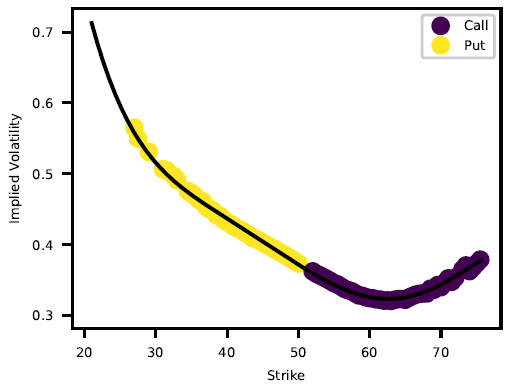 The second step is to calculate the call prices using the Black-Scholes formula for constant rates with your fitted implied volatility function, underlying price, time to expiration, and observed risk-free rate. 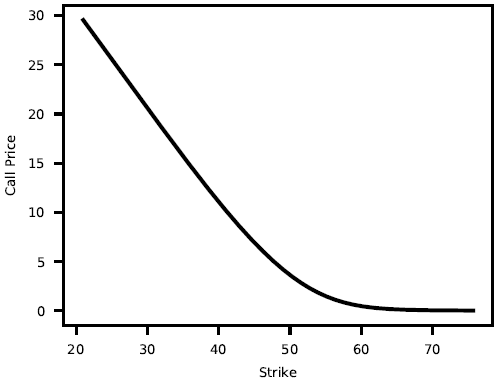 The third step, following the mathematical derivation above, is to calculate

using the first derivative of the call price with respect to the strike price. Numpy’s diff function will numerically difference your call price function. This effectively corresponds to using a forward difference to approximate the partial derivative. 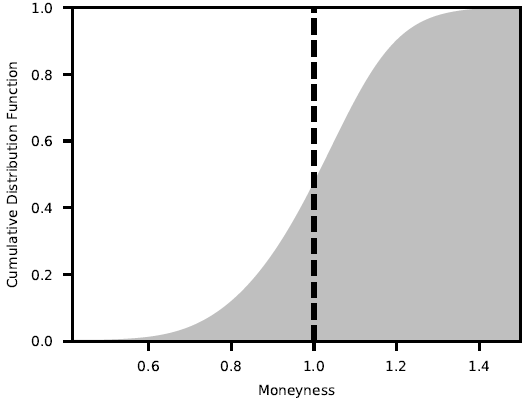 To compare these distributions across strike prices, using moneyness,

, as the x-axis is helpful. The fourth and final step, is to calculate 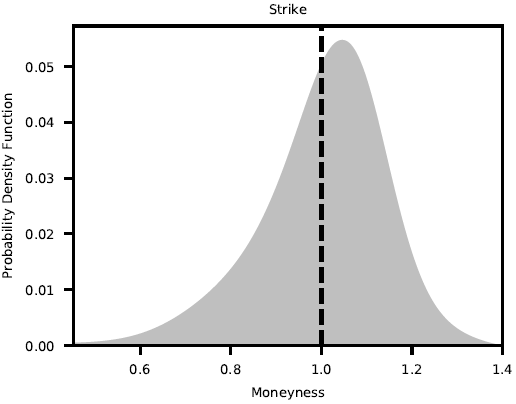 It can be difficult to generate clean RNDs and through this process it became clear how cumbersome it would be to generate these over an extended time series. To evaluate the quality of the fit, we need to check a few conditions.

There are additional arbitrage conditions to consider on the fitted implied volatility smile but our distributions meet the above conditions nicely so will be sufficient for our analysis. In fact, the absence of arbitrage is one of the few assumptions needed for the above mathematical derivation to hold. Further implicit assumptions include constant interest rates, that the call option price is twice differentiable and that a (smooth) probability density function of the price of the underlying asset exists to start with. Importantly, there are no further restrictions on the probabilistic nature of the underlying asset price process.

The above technique was repeated on the CLK2020 option chain for the four dates shown in the figure below to see how the option implied volatility RNDs reacted to the developing macro landscape including Covid-19, OPEC+, and crude oil physical storage capacity. The analysis was not extended into April as the possibility of negative prices violate some of the fundamental assumptions used. 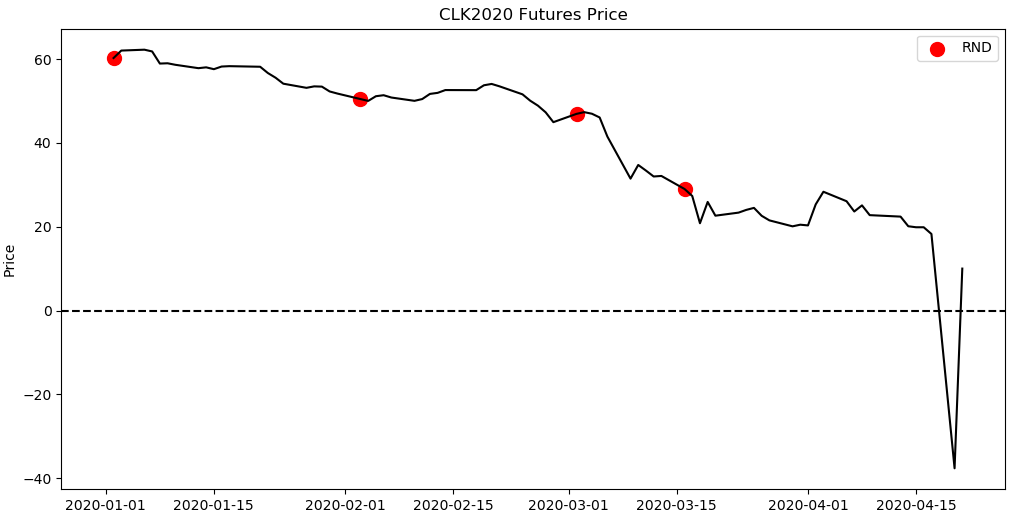 The resulting risk-neutral densities below tell quite the colorful story. In January, the distribution has a slight negative skew but high kurtosis. In February and March, the tail risk begins to emerge as the kurtosis decreases. Finally in mid-March the distribution flattens, presenting a very expressive RND. 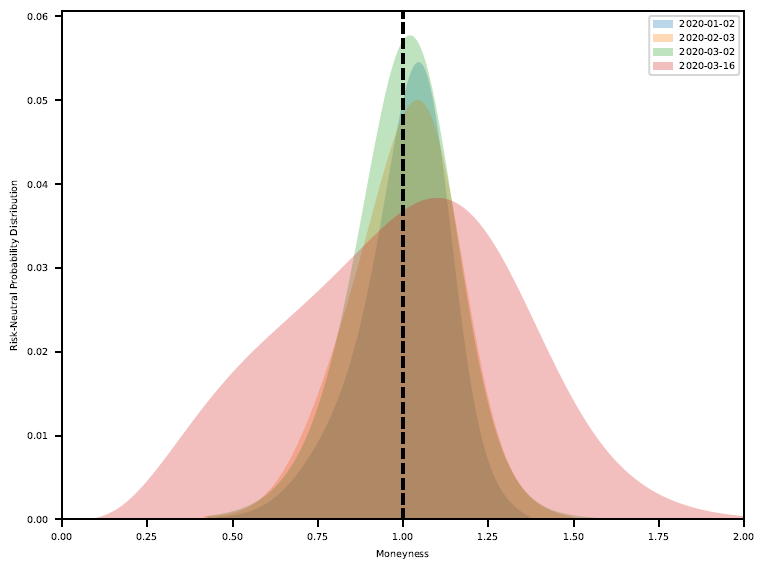 The corresponding fitted implied volatility smiles are shown below. 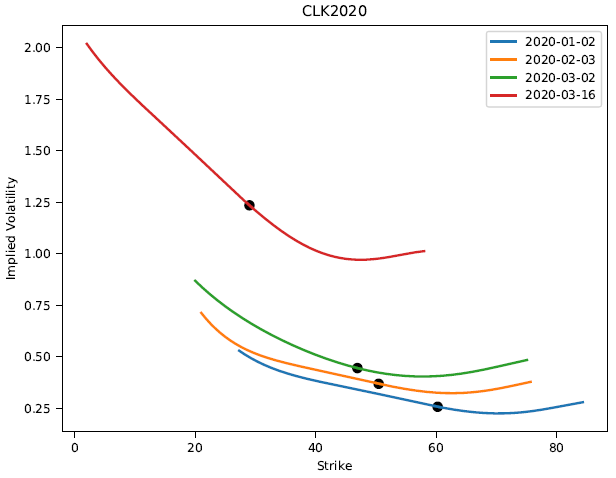 At the time, all eyes were on the calendar spreads and bear spreading the futures, short a nearby contract expiration month and long a deferred contact expiration month, was a popular trade. Based on the RND, this trade made sense if you believed that the bulk of the tail risk was in the nearby contract. Using the QuikStrike Commitment of Traders tool on the CME website we can look at the positioning of traders through this event [3]. The plots below show the positioning of the two groups that make up the “Non-Commercial” group of traders which includes hedge funds and large speculators. 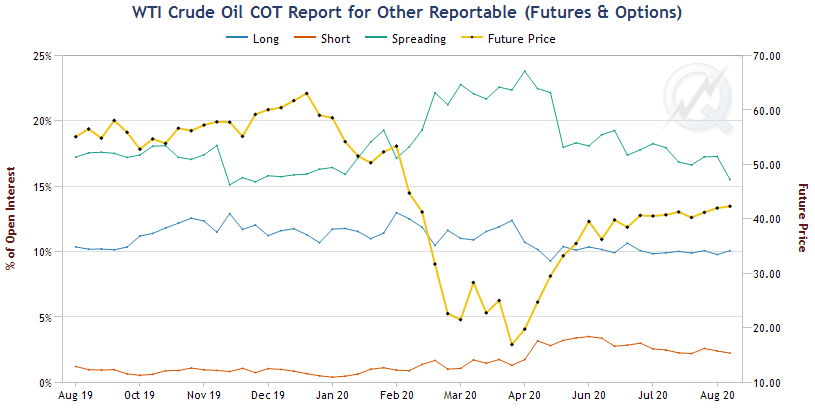 The “Managed Money” began the year with a larger spreading position (likely bear?) which decreased into February as a more concentrated short position grew. In April and May, they capitalized on the series of events, quickly building a fervent long position to ride the rally back up.

The “Other Reportables” held a large spreading positioning from the end of February until May, likely capturing the historical calendar spread move nicely.

It is important to emphasize that risk-neutral distributions are different from the real-world distributions which govern the likelihood of events in financial markets. A RND is an artificial probability distribution which allows the computation of option prices without specifying the risk aversion of investors (this insight is the reason for Scholes’ and Merton’s Nobel Prize in 1997). Thus, they are a very convenient mathematical tool but not a description of the real world.

In fact, the above idea can be formulated more rigorously. Let’s use a discrete setting for simplicity. Suppose we want to price an asset which generates a random cash flow of

where the random variable

is called the stochastic discount factor. In a discrete setting, the expectation is just the sum of outcomes weighted by the corresponding probabilities. Thus,

making them valid pseudo-(risk-neutral)-probabilities. Furthermore, denoting the risk-free rate by

, explaining the second equality. The final line is simply the discrete analogue to the equation at the beginning of this blog post: prices are discounted risk-neutral expectations of future payoffs.

) and the real life probabilities (

from option prices, but this does not tell us what the real probabilities

are because we do not know the right stochastic discount factor.

Changes in the RND can be attributed to changes in investor’s preferences, real-world probabilities, or both. A priori, it is impossible to know which of the three cases is true. Disentangling real-world probabilities from risk aversion typically requires a general equilibrium model of the economy and remains an open question for current research, see Ross (2015) [4] for a recent attempt.

In this tutorial I explain how to adapt the traditional k-fold CV to financial applications with purging, embargoing, and combinatorial backtest paths.

In this tutorial we utilize the free Alpha Vantage API to pull price data and build a basic momentum strategy that is rebalanced weekly. This approach can be adapted for any feature you’d like to explore. Let me know what you’d like to see in the next video!

Hi, my name is Colton Smith and I have a passion for investigating and exploiting financial phenomena from the perspective of a data scientist.

While working at Imbue Capital, I have built out a cutting-edge research pipeline for developing quantitative trading strategies that implements the best practices in financial machine learning including labeling techniques, feature engineering and extraction, model selection, cross-validation methods, model interpretability, and portfolio construction. We have used this pipeline to run systematic commodities strategies and aid global macro discretionary trading.

While working at Social Market Analytics, I assisted clients in successfully extracting alpha from alternative data through natural language processing and sentiment analysis. Whether used as the primary dataset or meant to augment an existing strategy, I am familiar with the development process beginning with the initial ingestion of the data to it being the backbone of a live, production model.

To further my financial knowledge, I explore topics of interest on my blog, Quantoisseur. I am guided by a principle that was well-stated in Euan Sinclair’s option trading book which reads, “it is better to deeply understand a simple concept than to have a superficial grasp of a more complex model.” Taking this further, it is necessary to be able to effectively communicate data and its implications, thus my blog serves as a method for me to solidify my understandings of the interactions between mathematics and finance. Additionally, I enjoy projects which allow me to find novel ways to clearly visualize data principles and findings.

Feel free to email me at coltonsmith321@gmail.com or connect with me on LinkedIn.